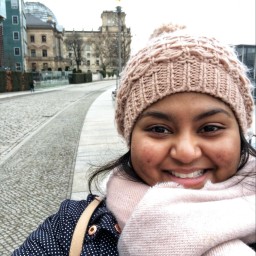 The Choices We Make & the Chances We Get (Episode #36)

I'VE BEEN FEATURED IN...

Take control of your finances with my Paycheck Budget Workbook

🎙 This episode is quite different to other episodes on this show. It’s a call to action to remind you not to waste the opportunities you get to make choices for your own life and your own future. Because that’s what Afghan women have faced in the past in the wake of Taliban control. And we’re about to watch history repeat itself from the safety of our living rooms. 🤔

Links from this episode:

NY Times: For Afghan Women, Taliban Stir Fears of Return to a Repressive Past: https://www.nytimes.com/2021/08/17/world/asia/afghanistan-women-taliban.html

Hey there, friends! And welcome back to Girl on FIRE, the financial independence podcast for independent women.

My name is Priya, I’m a Chartered Accountant, an analyst and the creator of Paper Money Co.

And that’s why this weeks’ episode is going to be quite a bit different. It’s going to be rather short but it’s super important and it needs to be said.

By now, I’m sure you’ve seen many news reports about what’s happening in Afghanistan.

And if you’ve been living under a rock and you haven’t heard, then what you need to know is that the US and other countries have withdrawn their troops.

And the Afghan government was very quickly ousted by the Taliban who have now taken control.

Now, I want to be clear about something straight off the bat. This episode isn’t about arguing about politics and international relations.

We’re not talking about democracy or religion or terrorism or anything like that. We’re talking about the same thing we talk about every week.

And I wanted to talk about this today because in the midst of dealing with our own lives and what’s happening around us, it can be easy to forget what’s happening in another part of the world.

It can be easy to forget just how much control we have. To overlook the privileges we have by living in places like Australia or the US.

There are thousands of Afghans in danger right now, including journalists and academics and activists.

But what I want to talk about today is what Afghan girls and women are facing under Taliban control.

The last time the Taliban were in power some 20 years, ago, women were extremely oppressed. And there are fears that history is about to repeat itself.

Because here’s the thing — with the Taliban in control, Afghan women and girls faced gender based discrimination and violence like so many other women around the world.

And for no other reason other than the fact that they’re women. Just like you and me.

It’s a huge human rights crisis right now. I’ll leave some resources linked in the show notes about this if you want some more information.

But if the past is any indication, it means that girls will be banned from being educated past the age of 12.

They’ll be married off to men who are twice their age. These girls and women will be forced to marry someone they did not choose.

They’ll be oppressed by a morality police that once cut off a woman’s thumb because she was wearing nail polish.

Women who are merely accused of adultery will be stoned to death. Homosexuality will be a crime punishable by death as well.

They’ll be told what to wear and where they can go. They won’t be able to drive or get drivers’ licences.

They won’t be allowed to attend universities, build a career or hold office in government. They’ll largely be confined to their homes.

They won’t be allowed to leave their houses without their husbands or male guardians to escort them.

If you really want to see what I’m talking about then the book A Thousand Splendid Suns by Khaled Hosseini shows it really well.

Now, the Taliban have reportedly stated that women will have rights under Islamic Law and that they’ll be treated better than they have been in the past.

But everyone knows that history has a tendency to repeat itself. Especially because we as humans are so notoriously bad at learning from our mistakes.

There are already reports of armed men guarding the gates of universities to prevent female students and teachers from getting on campus.

I bet that’s a lot different to what you experienced in university. It’s world’s apart from what I experienced. I hopped on a train alone, walked to my classes alone.

Sat in a cafe studying alone…or with a boy. I wore what I wanted, went shopping alone between my classes. I hung out with friends in the bars around campus.

It’s truly heartbreaking. While we sit here week after week talking about taking control of our lives through building wealth.

But these Afghan girls and women are having all semblance of control taken away from them.

They have no control over who they marry, if they marry. What they wear, where they go, who they see.

They have no control over their own bodies, let alone over bank accounts and investment portfolios.

I believe that I became a feminist before I knew what the word meant. When I was a child and I realised that if I had been born in another part of the world, I would have had a very different life. Just because I was a girl.

And that’s something I think about a lot, especially now.

Because I chose to go to university. I chose to study business and finance. I chose to get a drivers’ licence and I can drive around by myself.

I chose who I was going to date. I chose to be bold enough to ask boys out instead of waiting for them to come to me.

I chose to build a career, to move out of my family’s home and live with my boyfriend.

I got to decide that I wanted to get married and I chose the man I married. I chose to be his wife. I can go shopping alone and wear whatever I want.

I have control over my career, my life, my money. I have multiple bank accounts.

I have investment accounts all in my name and wealth built with all my own money. I’ve earned my own promotions and chased my own dreams.

I have the ability to access the contraceptive pill. And that gives me control over my own body. I get to choose when I have children.

I get to choose if I have children. And all because I was born in Australia instead of a place like Afghanistan.

If you’re listening to this episode right now, then you’re probably in the same boat as me. Or at least a very similar one.

I know we’ve all still faced sexism and misogyny throughout our lives. But we still have more choices and more opportunities than women have ever had before.

And there are still parts of the world where the choices you and I make so easily are denied to millions of women simply because they’re women.

Now, I know this episode is a lot more soapboxy than usual. But I really wanted to say something about this.

And I sure as hell am not going to squander it. So, my challenge to you this week is to really take charge.

Take control of your life because you can. Make the best choices you can for yourself.

Seize the opportunities that come your way. And take the chances that millions of other women don’t get.

Want to be the first to know when new episodes are released?

Also, podcast reviews are crazy important to the iTunes algorithm. The more reviews we receive, the more likely we’ll be able to get this podcast in front of more people and grow the PMC Squad!

I'd be super grateful for your help in making financial education available to everyone.

Leave a review right here letting me know your favourite part of this episode.

As always, a massive thank you to my Patrons for supporting this show.

Their support makes it possible for me to create and share this content and grow this podcast. If you want to support the Girl on FIRE podcast, head to Patreon and become a Patron. All the links are in the show notes.

My Patrons get amazing benefits for supporting this show like:

There are a number of tiers you can join or you can pledge a custom amount that suits you.

Did this episode help make managing your money a bit easier? I'm sure your social media followers would love to learn how to get good with money too!

I’d be forever grateful if you shared it on social media. If you do, tag @papermoneyco so I can repost you!

See you in the next episode!

The advice shared on Girl on FIRE is general in nature and does not constitute financial advice. The information shared does not consider your individual circumstances. Girl on FIRE exists purely for educational purposes and should not be relied upon to make an investment or financial decision.

I'm not just someone who plays with spreadsheets. I'm a Chartered Accountant and an Analyst with years of education and experience in finance. I believe in being the best at what I do, so that I can make the best  products for my customers.

You can go 100% digital with my products and save some trees. Or, if you prefer to print on demand, you won't be paying for packaging or shipping which reduces your carbon footprint.

All the financial tools I've designed have come from personal necessity. That means I've road-tested each of them in my own life, so I know how life changing they are.

I'm a firm believer that women everywhere deserve to be financially empowered. You don't have to be wealthy to have access to financial education and the right tools.

Please log in again. The login page will open in a new tab. After logging in you can close it and return to this page.